September 09, 2019
Ladakh has become one of the most popular tourist destinations in our country not just for foreigners but people from India as well travel to Ladakh to witness its pristine beauty and soak in the rich culture.

Ladakh boasts of a strong Buddhist heritage, because of which there are many monasteries all over Ladakh. Music, dance and religion are all important cultural aspects of the monasteries there.
Chants, recitation of texts, accompanied by traditional rhythmic drumming, mask dance festival, and one of the foremost source of formal education in the region. Everything was done in and around the monasteries. Which is why the monasteries in Ladakh are more than just religious centres and tourist attractions, they are the embodiment of the life and culture of the enriching history and the people of Ladakh.

Some of the prominent and must-visit monasteries there are - Thikse Monastery, Shey Monastery, Hemis Monastery, Diskit Monastery, Alchi Monastery and the Hundur Monastery.
Ladakh is definitely a marvel to behold but not visiting the monasteries would deprive one of truly experiencing the wonder of that land.

Monasteries are also known as Gompa in Tibet and Ladakh.

Thikse Monastery
The Thikse Monastery is part of the Gelug sect of Tibetan Buddhism and is located on top of a hill in Thiksey near Leh. The monastery is known for its resemblance to the Potala Palace in Lhasa, Tibet.
The monastery houses the largest statue of the Maitreya (the Future Buddha) in Ladakh which was built to commemorate the period when the 14th Dalai Lama had visited the monastery in the 1970s.
Also during the months of October to November the Gustor festival takes place at the monastery. It is known as the ritual to sacrifice the 29th date, there are mask dances, re-enactments of tales, distribution of a sacrificial cake called Torma, symbolising the triumph of good over evil. Also a trade fair takes place at the base of the monastery wherein villagers from all over Ladakh come to barter and socialise. 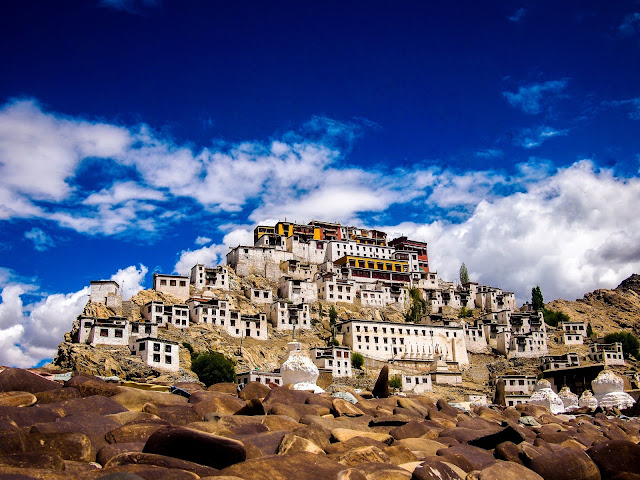 Shey Monastery
The Shey Monastery along with the Shey Palace is located on a hummock in Shey on the Leh-Manali Road. The Palace is mostly in ruins now but the Monastery still stands, both were built somewhere around 1655. It is situated close to the Thikse Monastery.
The monastery is noted for its giant copper and gold statue of the Shakyamuni Buddha (Sage of the Shakyas), it’s said to be the second-largest of its kind in Ladakh.
The monastery is home to a single Lama and so special permission is needed to visit as the inner sanctum is usually closed.
There are two major festivals that take place in the monastery, the first one in the months of July or August, known as Shey Doo Lhoo, marks the beginning of the sowing season, the monks perform certain special rituals, while villagers from the surrounding area visit the monastery for the celebration.
The second festival is known as Shey Rupla, which marks the harvesting season, during this festival, the farmers offer the first fruit of the corn to the monastery and the Rhupla Dance is performed by men in tiger costumes. 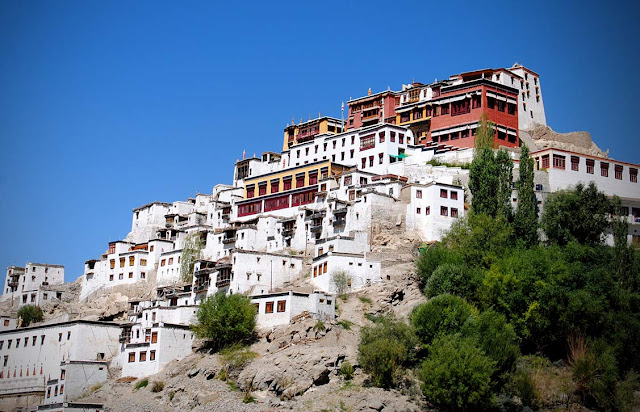 Hemis Monastery
It is a Himalayan Buddhist Monastery of the Drukpa Lineage situated in Hemis, Ladakh.
The Hemis festival takes place every year in June or July, which is dedicated to Lord Padmasambhava (Guru Rinpoche), it is a two-day extravaganza at the monastery, which is draped in colour in celebration of the birth of Padmasambhava.
Showcasing of the local handicrafts, along with the natives dressed up in traditional attires gather in the monastery, which is the biggest Buddhist Monastery in Ladakh.
The famous Chham Dance is performed during this festival as well as the Devil Dances. It’s one of a kind celebration and people from all over come to partake in the festivities. 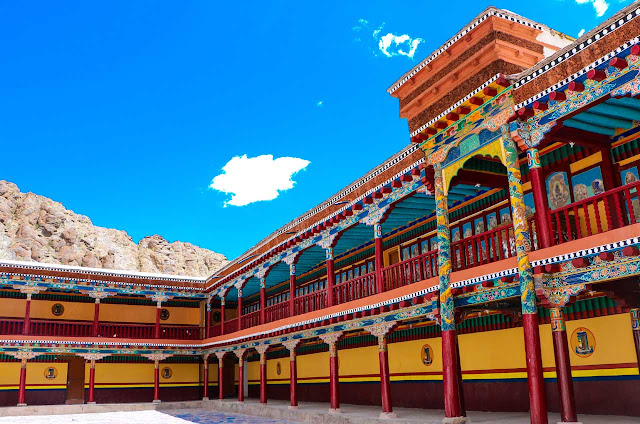 Diskit Monastery
The Diksit Monastery is one of the oldest and belongs to the Gelugpa sect of Tibetan Buddhism. It is located in the Nubra Valley of Ladakh.
The Monastery has the statue of Cho Rinpoche (the Crowned Buddha), the paintings of several fierce guardian deities and a Mural of the Tashilhunpo Monastery of Tibet.
The Gompa runs a school with the help of an NGO known as the Tibet Support Group, which teaches subjects of science to the Tibetan children of the region.
The Dosmoche or the Festival of the Scapegoat is the popular festival celebrated in February at the Diskit Monastery, expert Lamas from Takthok Monastery come to eradicate evil by trapping demonic spirits and ghosts by weaving intricate thread crosses. 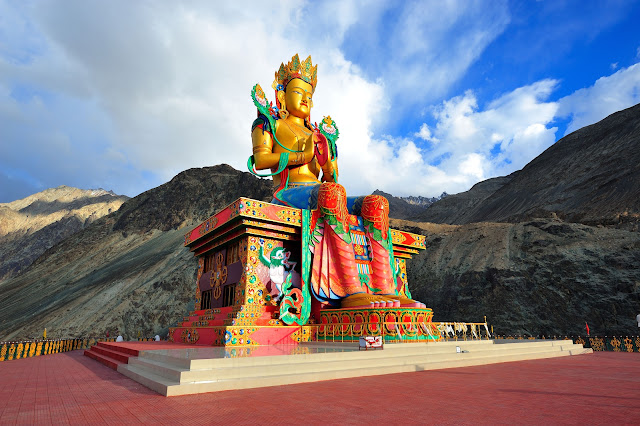 Alchi Monastery
It is a Buddhist Monastery which is actually a monastic complex (chos-khor) of temples in Alchi village in the Leh District, Ladakh.
There are 4 main structures of the complex, first is Dukhang or the Assembly Hall and then the Main Temple, which is a three-storied temple called the Sumtseg; the third temple is called the Manjushri Temple. Chortens are also an essential element of the complex
Buddhist rituals and Hindu Kings of that period are painted over the walls of the monastery, giant statues of Buddha and elaborate wood carvings can be found around the complex.


Hundur Monastery
Hundur Monastery is also a Buddhist monastery in the Hundar village, in the Nubra Valley of Ladakh. It is located near Diskit Monastery and Lachung Temple.
The Hundur and Diskit Gompa are closely situated and so the rituals, lamas and festivities are often shared among the two Gompas.

So there is clearly a lot more to experience in Ladakh than the breathtaking views, there is more than what meets the eye, literally and spiritually.